0
No products in the cart.

The 33” Holy Toledo is suited to teenager to adult surfers 5”4’ – 6”0’ (162cm – 183cm) in height. The 33” Holy Toledo is the original signature model of World Top 3 surfer Filipe Toledo. The 33” has a shallow concave and is suited to surfers who wish to pump and generate speed on flat sections. The 33” Toledo is also considered the step up board from the 32” Flying Fish, as it shares the same concave profile but more: width, length and wheelbase.

The 33” Holy Toledo has been a very popular model for many surfers all over the world and has all round performance for practicing surf turns.

The model name “Holy Toledo” was inspired by Felipe’s nickname, due to his radical and progressive surfing style when he was only 16 years of age. Toledo loved the looseness of the 32” Flying Fish, but needed a bit more drive so a design was created extending all the measurements. Toledo later tested a few different setups of width and wheels base distances. The 33” Holy Toledo gives surfers an all round surf performance and especially excels in generation of speed on flats. 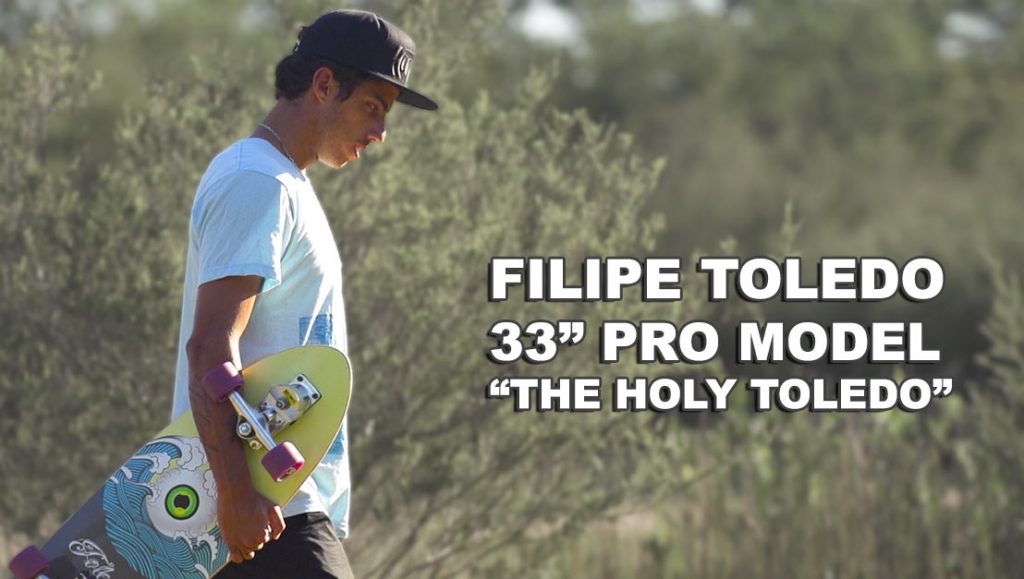 Who is Filipe Toledo?

The design of the deck design features many aspects of Filipe including his green eyes and the Toledo family tattoo. On the deck, it has the Filipe Toledo trademark aerial assault.  It is finished in a sandy yellow/blue/grey.

The deck concave and tail is perfect for surf carving the streets. The deck is wider than most other skateboards so it helps your keep your line when you are drawing out your bottom and top turns.

There are no reviews yet.

Be the first to review “SMOOTHSTAR 33” Holy Toledo” Cancel reply

A hard charging featherweight performer for those that like it fast and loose.

All new for 2022, Sam Brown’s Unity AERO. Sam describes this board is like an exquisite piece of artwork…with depth and elegance. Find yourself with your own paintbrush and unlock your maximum potential with the Unity AERO!

The Billabong Hoodie Towel is a light weight towel with embroidered logo, perfect for chilly surf checks or warming up post-surf.

For the high level rider looking for the ultimate in lightweight performance, as well as some “user friendly” features to help with figuring out first time tricks!

Meagan is evolving our sport and pushing the LF engineers to improve her product. With the M.E. AERO weighing 5.35 pounds, our R&D team helped take her riding to the next level. Made from a lightweight AERO core with C4 carbon reinforced top and base…this is Meagan’s lightest board yet. Progress your riding to levels unimaginable.

The Triple 8 Saver Series 3-Pack Color Collection comes with Wristsavers, Kneesavers and Elbowsavers – everything you need to keep you protected below the head.